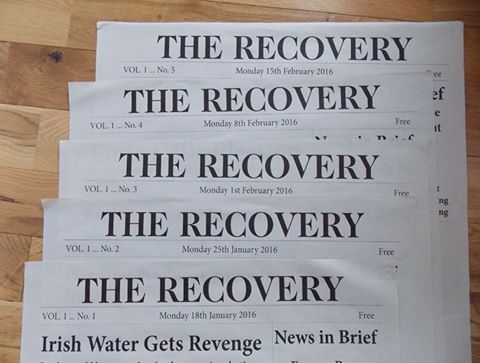 Ah yes, the day after another once in a generation demonstration (though they seem to be adding up of late) and our mainstream pisstake of a print press betrays its regime loyalties and carried barely a mention of #RightToChange.

Surprised?  Nah, neither were we – and neither are most other folks. Emily McGardle’s a fourth year art student and is working on her final year project. She’s picking up on some of the subtextual shenanigans in our daily news paper grinds and making satirical hay.

She’s got prior form too, having exhibited down at the Winter Exhibition at The Gallery, in Listoke with a “Cuddle Me Cabinet.” Imagine voodoo dolls with cut outs of our beleaguered coalition figureheads attached to them.

We asked her what inspired her latest effort. She had this to say:

“This project was borne out of my frustration with politicians doing and saying ridiculous things and appearing to not face any sanctions. I live in Monaghan where the former Fine Gael TD Sean Conlan is currently remanded on bail for glassing a man in a bar fight, and the Fine Gael Councillor Hugh Mc Elvaney was caught in the RTÉ Primetime Investigates scandal. Sites like Waterford Whispers create fictitious news stories but for me, the real news is sometimes more ludicrous and unbelievable. In other political related projects that I have done over the past two years, I have always used real news stories and direct quotes from politicians and presented them in a satirical way which highlights absurdity and ridiculousness while still being informative, which is what I hope to achieve with this project.”

Screen printing, for those of you that don’t know, is an arduous enough process. When asked how come she didn’t just circulate the piss take papers online like memes she said:

“I chose print for this project because print media is still one of the main methods of communication for election candidates. Even though social media has had a significant impact on this election, it could be said that printed ephemera is one of the only ways that every voter can be reached directly; leaflets and flyers through the post and to a lesser extent, election posters. The reliance on printed media still exists possibly due to the fact that politicians cannot broadcast ads on television like they can in the US. I am printing a somewhat large edition of 100 for each of the sixteen screenprints in this project to reference the massive amount of ephemera produced during elections.

Will she keep The Recovery going after the election? Yep, til April! You’ll be able to catch it at the DIT graduate exhibition in June too.

You can keep an eye on her work on Facebook or Emily’s own site.