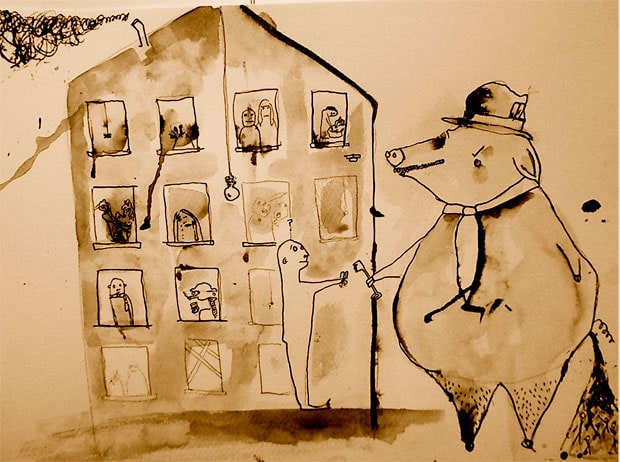 Catherine Tomkin’s interpreted the rental market for us in rabble 2.

While clowns like Tom Barry are selling up their houses over fears property hating communism has come to Ireland in the form of those new housing measures, a more sane criticism grows as people finally digest what the new measures really mean.

Among that growing critical chorus is the Dublin Tenant’s Association.  Central to their disagreement is the fact that tenants will basically receive two years worth of rent increases in a sizeable jump rather than staggered increases.

Also they say that the measures are basically an extension of the Residential Tenancies Act that stipulates rent reviews may occur once every 12 months rather than anything more radical. The so called “new deal for tennants” announced yesterday sees this extended to 24 months rather than a ‘rent freeze’ as talked about.

Sive Bresnihan, a volunteer with the Dublin Tenants Association comments that

“The anxiety and fear we experience once a year under the current legislation, will now occur only once every two years but will be twice as intense.”

Fionn Toland, another volunteer with the DTA added:

“Tenants are asking us what these measures mean. We have to tell them it means you can now lose your home once every two years, instead of once a year. We really thought we might have something more positive to say when these announcements arrived, it’s bitterly disappointing for us and for the tenants we work with”.

Elsewhere Threshold issued a bizarrely mooted welcome for the proposals and called for linking to the Consumer Price Index to be brought into the equation. As  Senator Aideen Hayden, Chairperson of Threshold commented:

“In the coming months Threshold will be leading a debate on the future of the rented sectors.  We strongly believe that there can be no return to ‘business as usual’ when it comes to meeting the needs of the increasing number of people relying on the rented sector for their accommodation. Future measures for the period beyond the two year rent freeze must include measures to link rent increases to the Consumer Price Index.”

If you are looking for ideas on what could have been done to ease rental pressures, then jump in the Deloreon here and have a read of the recommendations put forward by We’re Not Leaving last year.