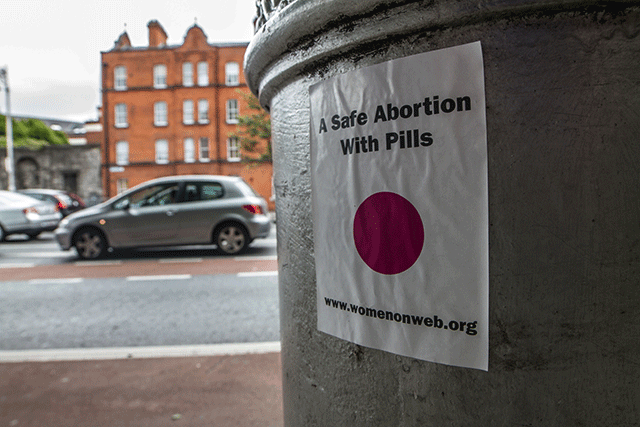 One of the many stickers that dotted the city in the past year. Aoife Campbell took a look here.

Together and full of grace. These are excerpts from a few different women’s stories. Were calling them the Marys because yis don’t need to know their real names, nor do the authorities.

They all chose abortion. They all agreed to share their stories to help other people find the words to voice their experiences. One went to the UK, some ordered pills online, one miscarried though it was their intent to terminate.

“I have always been very careful with birth control. I was on the pill and my boyfriend used the pull out method. At the beginning of the year I missed my period and I knew I was pregnant. I cried for the whole day. My boyfriend was amazing, telling me everything was going to be okay and that I didn’t have to worry. We both decided that an abortion was the option we would go for.”

“ One of the crippling issues to deal with once we made the decision was how we could possibly afford to travel and pay for the abortion. Unlike many others we were lucky enough to find the money in time. We arrived at the clinic and I took the abortion pills as instructed by the nurse. There were two different kinds. Firstly Mifepristone for stopping the pregnancy hormone progesterone and secondly Misoprostol which causes contractions expelling the pregnancy, on par with that of a natural miscarriage. When the abortive process came into full effect I was in the airport waiting for my flight home.”

“Getting the €90 donation together was a bit of an issue. The online questionnaire deemed me suitable. My friend organised an address up North to pick the pills up as Women on Web were having difficulties getting everything through the Republics customs. I kept in contact with the guy up North, went up and got them. The bus back down was nerve-wrecking as the bus I was travelling on was selected for a random immigration check. I look distinctly Arabic, have an Arabic name, had no ID and also carrying what is considered illegal substances.”

“Eventually I got a cervical exam and was told there was some foetal tissue left and did I want to pass it naturally or have them pull it for me. Passing it naturally has an increased chance of infection. They pulled the tissue out and showed it to me after, it was a smaller clump this time. The nurse strangely then explained to me that it wouldn’t be incinerated but buried on consecrated ground, I replied I didn’t care but couldn’t say I never wanted to pregnant in the first place. I had organised a termination and would have gone through the exact same process a week later just with pills.”

“I am angry. Angry that I could not confide in anyone, for to be put to shame. Angry that I had no knowledge of what was to follow after taking them pills because abortion clinics and informing doctors are not here were so many need them. Angry because it has had an effect on me, not because of the abortion (not for one minute do I believe I committed a murder or crime) but because of the means in which I was forced to go about it. Angry because of the bleeding and pain for months after, but having too much fear to see a doctor in case they knew what I did.”

Send your stories to shareyourabortionstory@gmail.com

Leave a Reply to Gareth Cummins via Facebook Cancel reply